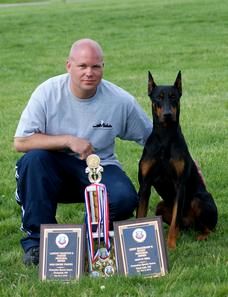 Scott takes pride in his role as the Mid-West Assistant Director and Emeritus Decoy with the Protection Sports Association. Scott has won multiple PSA titles with his own Dobermans, Caesar and Louie.

Scott first became interested in Police K-9 training while proudly serving his country in the United States Army in the 505th Parachute Infantry Regiment, 82ndAirborne Division. His time in the military taught Scott the importance of discipline, hard work, and effective communication. These lessons are integral to Scott’s dog training philosophy.

After being honorably discharged from the Army in 1999, Scott returned to Cincinnati to pursue his lifetime dream of working with dogs. He began his career as a dog trainer by apprenticing under a Master Trainer. Scott gained experience in all aspects of dog training, including obedience, patrol and detection work. After a few years, Scott became the manager and head trainer of the dog training facility. In addition to running the school and training dogs and their handlers, he was also responsible for training all new staff and kennel personnel.

In 2010 Scott became the Head Trainer at the Pet Athletic Club. He specializes in aggression problems, advanced obedience, behavior modification, police dogs and personal protection dogs. Scott is responsible for training all new trainers, developing new programs, and managing the board & train program. He and his Business Partner Ellery took over the company in August of 2019. They are always looking for new ways to improve the PAC to better serve PAC Members.

What Our Customers Say

Don't take our word for it, see why other local pet parents choose us for their pet's needs! We've helped dogs from near and far including Cincinnati, Covington, Mount Adams, Newport, Bellevue, OTR, Hyde Park, and more!

Scott and the team from PAC trained our first dog in 2017. We were so delighted with how things turned out with our first experience that when we found a stray dog in December 2021 and decided to add him to our family, we reached out to Scott and Ellery to make reservations for him to attend the Board and Train Program at PAC. He just graduated two weeks ago and we see the same fantastic transformation we saw with our first. Both are pit bull mixes and found as strays and did not appear to have any training or structure prior to their time at PAC. Scott and his team taught both dogs commands that allow us to have a full life (being with us in public and under control) with our dogs and the long term support (weekly group sessions) required for you to add the skill and confidence needed to follow through on the excellent foundation and training from PAC. Take if from the owner of two, hard headed, full spirited terrier mixes…..I don’t think you will be disappointed with your decision to have your dog trained at PAC.

I have been using PAC’s daycare service for my dog, Eddie, for a few weeks now. I reached out to Ellery at PAC with tons of questions and she had patience and answers for every question I had. Eddie went to his evaluation, which took several days to ensure a good fit, and I appreciated the personal feedback given at every pickup. Ellery, Scott, and the PAC team are extremely attentive and care more about animal safety and health than any other provider in the area. I love the ease of drop-off and pick-up, the option to pop onto the Webcams and see what Eddie is up to, and being able to ask Ellery and Scott questions about his behavior. Most importantly, the daycare at PAC is no-nonsense. I know that PAC staff is correcting nuisance behavior and that Eddie is in a safe place learning boundaries and healthy interaction. I opted for their unlimited package to test out Eddie’s first month and I have a feeling I will be a repeat unlimited customer. Thank you, PAC staff, for being so great!

We LOVE PAC!!! We have used PAC for training, daycare, and boarding and couldn’t be more pleased with everyone there! Ellery, Scott and the gang treat our pup like one of their own! Having a high energy bird dog, we are so lucky to have found people that have helped train our dog and treat her like family while we are away! It’s more than just daycare, it’s dog parties, and special treats, and just knowing your dog is loved while being away from you. The best part of the day is bringing a tired dog home from daycare!! Proud to be a part of the PAC!

We love PAC!! I can’t say enough good things!! Ellery, Scott and gang treat our dog like one of their own! So grateful to have a place we can use for training, daycare, and boarding!! Ellery goes the extra mile to make sure daycare and boarding are fun for the dogs while still giving them all individual attention!! Scott has been a great trainer for our high energy bird dog and always available to answer any sort of questions we have had! There is nothing better than a tired pup at the end of the day!!

Counted on this place for many weekend stays. My dog was always excited to come for boarding and sad to leave. Great pricing and super friendly staff that will commit you and your dog to memory. Check them out!